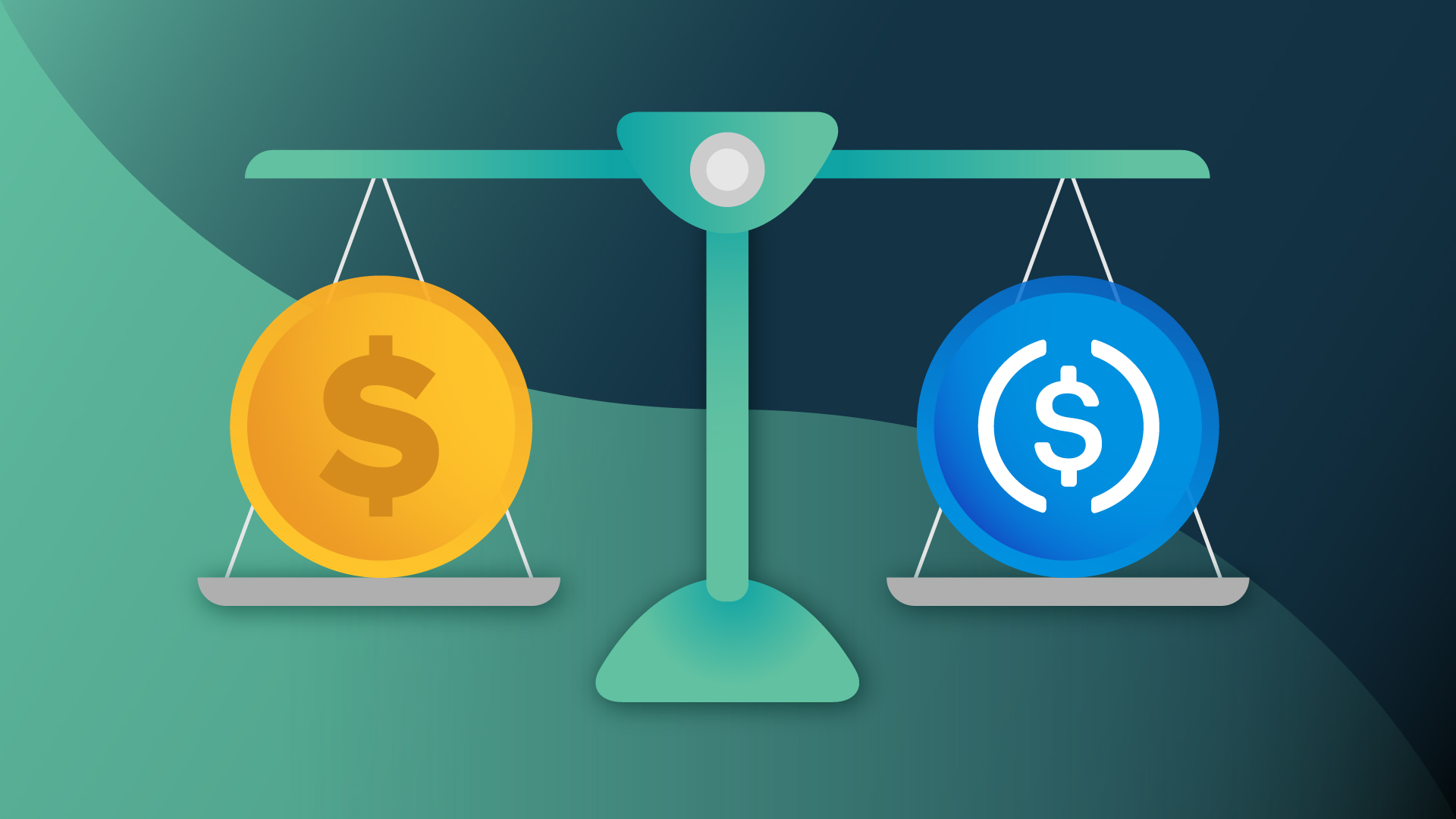 A stablecoin is a crypto asset that is pegged to a separate asset that has a constant price, such as fiat currencies or precious metals. Learn more here.

In the volatile world of cryptocurrencies, stablecoins provide an invaluable service – they maintain a fixed price. Stated simply, a stablecoin is a crypto asset that is pegged to a separate asset that has a constant price, such as fiat currencies or precious metals.

The importance of stablecoins to the health of the cryptocurrency ecosystem as a whole cannot be overstated. Over the last several years, they have come to form the backbone of decentralized finance and provide a safe haven during significant market downturns.

There are many benefits of stablecoins. They’re relatively simple to mint and manage, are easily bought, sold, traded across borders, have an auditable nature, help decrease volatility, and serve as an accessible on-ramp for those just getting into cryptocurrency.

What Is A Stablecoin?

There are three primary types of stablecoin:

Fiat-baked stablecoins are backed by currencies like the USD or GBP, with fiat held in reserve as collateral to guarantee each coin’s value. USD Coin (USDC) remains the most well-known example of a fiat-backed stablecoin.

Fiat-backed stablecoins make up the vast majority of the current stablecoin market and remain one of the most popular types of stablecoin.

As of early September 2022, the total market cap of the stablecoin market rests at around $153 billion. Tether (USDT) enjoys a market cap of about $67.5 billion. USDC sits at about $51.8 billion.

Crypto-backed stablecoins rely on digital assets like Bitcoin and Ethereum to serve as collateral, instead of fiat currencies or other hard assets. Due to the inherent volatility of virtual currency, these types of stablecoins tend to be over-collateralized, meaning they hold excess value in reserves as a way to avoid liquidation during price swings.

The most well-known of the crypto-backed stablecoins that people invest in is DAI. This stablecoin, released by the MakerDAO protocol, is pegged to centralized stablecoins like USDC, other crypto assets, and real-world assets in an overcollateralized manner.

Due to the variable nature of the cryptocurrencies that back these types of stablecoins, they all rely on a mixture of game theory and on-chain algorithms to help maintain price stability.

Algorithmic stablecoins are another type of stablecoin that takes a different approach to creation and issuance. These coins maintain their peg through a combination of algorithms and smart contracts to automatically manage token supply.

When the price of an algorithmic stablecoin falls below the fiat currency it tracks, the protocol’s algorithm will reduce the token supply in an effort to help it re-attain its peg. Reduction strategies include locked staking, token buy-backs or token burning.

In contrast, if the stablecoin surpasses the value of the fiat currency it tracks, new tokens are automatically issued by the smart contract to help reduce the stablecoin’s value.

To date, there have been no successful, large-scale algorithmic stablecoins due to their challenging nature and perceived risk. The most well-known, TerraUSD (UST) suffered a headline-making collapse in May 2022 that triggered a wider crypto crash.

Before the crash, UST had a close relationship with Terra Luna, a ‘regular’ crypto. UST investors had the option to hold funds in an Anchor Protocol account which promised a 20% return on deposits. However, when Anchor switched to a lower variable rate - a UST sell-off occurred that led to a price slide for the stablecoin and Anchor’s ANC token.

Chaos occurred when UST lost its peg, which led to a massive collapse for both UST and Terra Luna. The crash of both coins led many to question the validity and viability of algorithmic stablecoins.

Following the implosion of UST and the effect it had on the cryptocurrency ecosystem as a whole, the prospect of regulating stablecoins has become a particular focus of some worldwide financial regulators, governments, and banking entities.

Many within traditional finance see stablecoins as threatening competition - due to their ability to maintain a stable price while functioning as a store of value for cross-border exchanges and payments.

Because of this, regulators are likely to be more thorough when it comes to regulating stablecoins, especially when it comes to issuing a stablecoin with fiat reserves. In August 2022, news emerged that a proposed piece of stablecoin regulating legislation would be delayed, leading many to doubt it would come into force in 2022.

According to news reports, officials like Treasury Secretary Janet Yellen have urged regulators to view stablecoins issuers like FDIC-insured banks. However, reported political squabbling has delayed the legislation amid questions about the outcome of November 2022 midterm elections.

Global regulators have also signaled desires to treat stablecoins like other traditional financial assets. In July, IOSCO and a committee from the Bank for International Settlements announced guidelines about when currently-existing rules should apply to large stablecoins.

In the same month, the Swiss-based Financial Stability Board argued stablecoins and other crypto assets function similarly to risk securities, requiring regulatory approaches that reflect these sentiments.

Are stablecoins a good investment?

Many wonder how to invest in stablecoins due to their popularity and interest by many across the globe. Similarly, vast amounts of people regard stablecoins as a good investment simply because they remain at a fixed price.

As a result, they allow investors to open a position in the crypto market (and diversify their portfolio) while avoiding much of the volatility issues that concern many other crypto investors.

Additionally, some feel better about investing in stablecoins as many are issued and managed by a central authority who is subject to regular asset checks and verification measures.

However, others argue the decentralized nature of many stablecoins poses investment risks, as holders then run into trust issues and the prospect that a particular project can fail.

Some worry that even fiat-backed stablecoins like Tether and USDC do not have promised amounts of fiat reserves, which could lead to a total project collapse if these fears were confirmed as true.

In particular, Tether has been in the middle of financial and legal wrangling related to purported market manipulation, lies about reserve amounts, and questions about the coin’s strength to remain pegged to the USD. All of these factors have led some to remain wary to invest in stablecoin.

Join us at SOMA

For users that are looking to get into the DeFi ecosystem, you can get on the SOMA waitlist and keep an eye on the interesting projects that will be released on the platform.