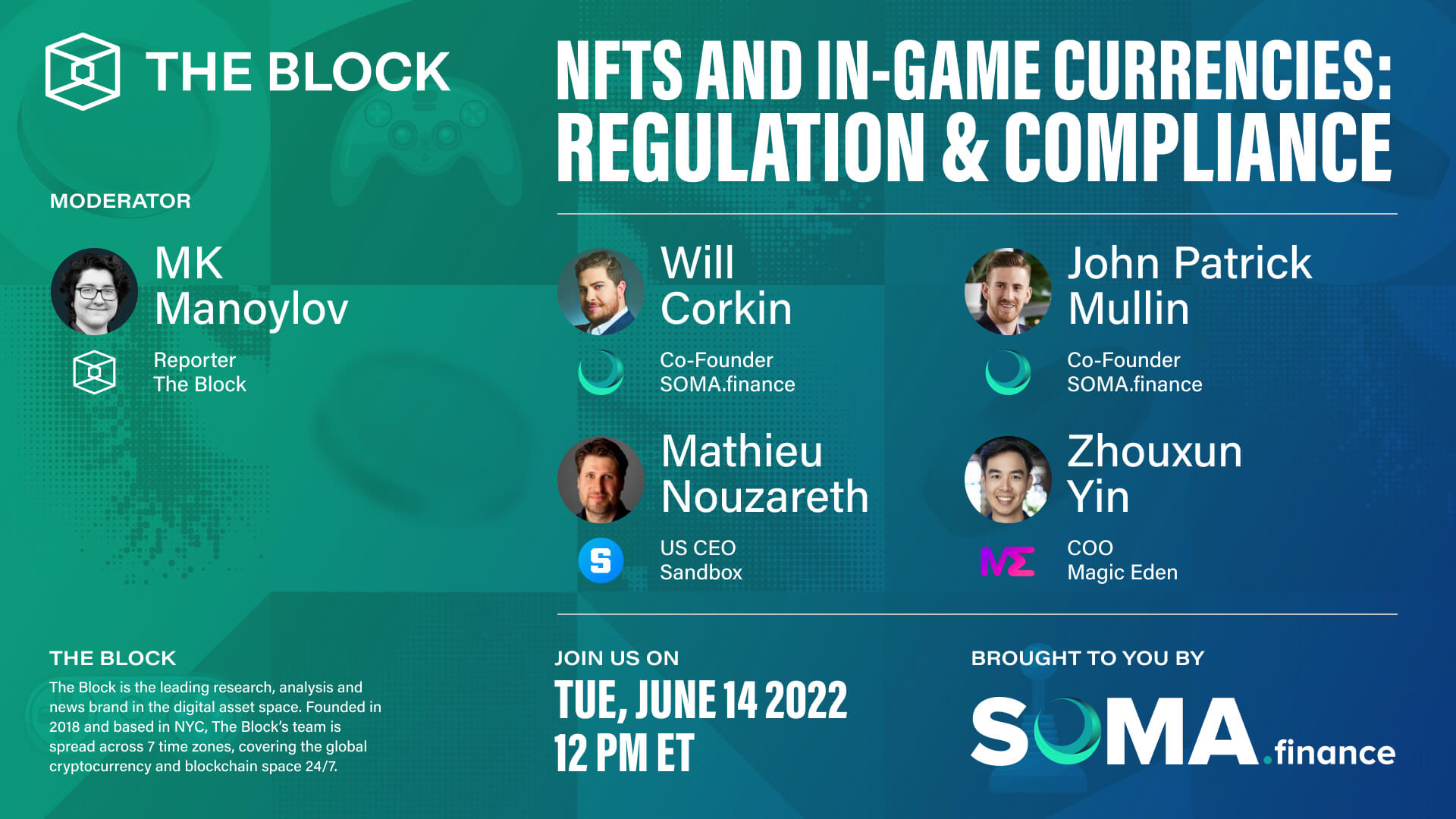 SOMA.finance co-founders Will Corkin and John Patrick Mullin joined a Webinar with The Block’s MK Manoylov and Zhouxun Yin

Watch the full discussion below:

The Block Webinar: NFTs and In-game Currencies Regulation and Compliance

Recently, SOMA.finance co-founders Will Corkin and John Patrick Mullin joined a Webinar with The Block’s MK Manoylov and Zhouxun Yin, the co-Founder and COO of Magic Eden, to discuss NFTs, in-game currencies, and how regulation and compliance fit in with this nascent asset class.

When it comes to how the NFT space has changed over the past year, all three panelists agree that the entire space is still in its early stages of growth and much more akin to an experimental sandbox.

According to Yin, developers are still exploring what’s possible and experimenting with new models for games in order to help determine what people are interested in while also attempting to navigate the uncertainty that the lack of clear regulations brings.

For SOMA.finance co-founder John Mullin, one of the more recent developments that has started to gain traction and shows a notable evolution in the industry is the increased distinction between utility NFTs and Security NFTs.

As NFTs evolve from being simple profile pictures (PFP) to having in-game use and value, increased regulatory scrutiny is pretty much a guarantee. This has prompted some gaming companies, including Animoca Brands, Griffin Gaming Partners and Forte to invest and work with SOMA.finance as part of their effort to get ahead of the curve on the regulatory front.

From their perspective, it's better to be in compliance long before the SEC eventually introduces new rules that the whole industry will need to adjust to.

SOMA.finance co-founder Will Corkin further elaborated on the ongoing evolution of the NFT space and pointed to how the technology was used with MantraDAO to provide access to specialized services including the token launchpad, as well as NFT staking which introduced decentralized finance elements.

Now, Corkin pointed to the emergence of new use cases for NFTs including the rapidly growing play-to-earn sector along with the use of NFTs to grant game licensing. Overall, Corkin expects to see more merging of NFTs with DeFi in the future, which will help bring a whole new level of added utility to non-fungible tokens.

One of the more recent models that the panel discussed is the move-to-earn phenomenon that projects like STEPN are capitalizing on. Yin sees this new field as incorporating a new incentive model in the play-to-earn space where users are rewarded for doing certain activities aside from simple gameplay.

Yin sees this trend leading to the emergence of more token economies and greater financialization of in-game assets, but noted that the current field of games “are still very experimental and not yet considered ‘true games’.”

When it comes to the regulatory specifics surrounding NFTs and in-game items, there is still uncertainty about how regulators will approach these topics. While it's possible that in-game items will more than likely be considered property, the issue gets clouded when users try and flip said item 100 times a day in an effort to make a profit.

For John, the ideal outcome would be to see people actually use a game and reinvest back into it rather than just farm and dump the in-game token. He sees value transfer and value accrual back into the tokens as a way to help grow their ecosystems and increase their value.

The main thing that projects need to do is stay apprised of the most recent regulatory developments so that the projects and their users can stay out of trouble with regulators.

When it comes to matters of compliance when there are no established regulatory guidelines, Mullin suggested that it really comes down to the tokenomics and use case of a token.

In the P2E sector it's clear that users are motivated by the financial benefit and financial rewards involved, so those projects are likely to fall under the purview of being a security.

As a result of this, many projects have opted to put a geofence around the U.S. to prevent American citizens from using their game in an effort to avoid attracting the attention of the Securities Exchange Commission (SEC). Overall, Mullin suggested that eventually, “NFTs are  100% going to be more regulated in the future.

In the current environment, all of the panelists agreed that no project is capable of being 100% regulatory compliant due to the current state of the system, so it's up to each game or startup to decide what level of risk they are willing to take to achieve the level of adoption that they are seeking. This will lead to a “spectrum of compliance” according to Yin.

As for the recommendations that SOMA.finance gives to projects looking to utilize its services to launch a new product, having a company presence established in the U.S. is a top recommendation along with a willingness to complete an audit and pay the setup costs. For projects with greater regulatory concerns, SOMA recommends that they build and get established outside of the US as a way to help generate income before attempting to offer their product to US investors.

Being a good actor in the space was also a key highlight each of the panelists as a way to avoid falling under the scrutiny of the SEC.

All of the panelists also agreed that the current lack of regulatory clarity has hampered the growth of the industry, with the biggest cost being time as the lack of a clear framework significantly diminishes a project's execution speed. This, more than anything, can result in a project having to close its doors due to lack of funds.

To help combat this, Mullin stressed that it's important for projects to “try and develop a strategy that doesn’t compromise speed but still allows them to access markets without getting subpoenaed.”

For projects that are interested in launching, SOMA.finance co-founder Will Corkin stressed that the platform can help “new games and projects launching to be compliant right out of the game with regulatory exemptions,” such as the Reg C exemption that SOMA offers support with.

As for the benefits that greater regulation brings to NFTs and in-game items, Corkin pointed to the “ability to trade an in-game asset for something like Ethereum or a derivative of Tesla stock” as a major game-changer.

For Mullin, the gaming sector is a major avenue to onboard new users into the crypto ecosystem without all the regulatory hurdles that are involved in decentralized finance (DeFi). Once these users are in, the new assets that will be generated by these players will provide a new use case for DeFi which will facilitate the buying and selling of these assets.

When it comes to the topic of gaming and decentralization, the panelists also agree that there will likely be a spectrum of decentralization that projects will fall along depending on the goals of their creators and the level of regulatory compliance that they want to have. For those that wish to remain fully compliant, it is unlikely that the project will ever be fully decentralized.

According to Yin, “It's up to each team to decide what is best for their project in terms of the ethos they are going for.”

One of the main takeaways from this webinar is that regulatory concerns are mainly a concern in the United States, so projects need to decide how they want to approach wooing US gamers and investors.

Important questions that each project should consider according to Mullin include, “how much are you raising, who are you raising it from, how are you going to sell your tokens, will you be doing a KYC with the offering, are you selling to US residents and are you from the US?” If the answer to any of the latter questions is yes, Mullin recommended caution.

Finally, all of the panelists agreed that one of the things that is most needed in the NFT and GameFi ecosystem is a greater level of infrastructure for developers to work with. It takes a lot of time and effort to build a good game that users want to play, and that is before you complicate things with blockchain technology, tokenized assets and regulator scrutiny.

It's also important to note that crypto in general is still new and unfamiliar for a lot of people, including gamers, and it will still take some time for gamers to open up and embrace the future that cryptocurrencies are helping to build.